The case for hunting in South Africa

Whether it is trophy hunting or hunting for meat for food or hunting to control game numbers - it needs to be done because there is limited space on the habitat the wild game occupy. So taking a part of any animal for a trophy / momento , whether it is from a trophy size animal or not does not matter.
Trophy hunting brings in the most money for trophy size animals and non trophy size animals like females and young males bring in less money. All properties with game NEED to remove excess of trophy and non trophy almost every year and the best and most economical and humane way is by hunting.

Job creation, major employment with better benefits to staff ( tips, better wages ), add on money into the economy of South Africa (flights, hotels, taxidermy, too many to mention all) AND conservation of wild game, all wildlife, water, habitat and top soil = a clear winner all around. But if hunters don't come these now wildlands will be converted back to cattle, sheep, goats, crop land and even developments like houses, villages, mining = a total LOSS for all.

There are many people around the world (especially in the Western world) who are opposed to hunting. This may arise from a personal aversion to hunting or from ignorance about hunting, which is a misunderstanding which needs to be explained.

Our comments here do not reflect on any form of hunting in any other country than South Africa and the way we hunt at Richard Holmes Safaris, which is by fair chase and on foot.

Historically, by the early 1950's, South Africa's wild game was at an all time low with some species on the brink of extinction with a TOTAL of only half a million wild animals left in South Africa. ( eg. Black Wildebeest only 52 left, Bontebok only 22 left, Cape Mountain Zebra only 22 left and many other game species so few no one ever saw them ). Wild game meat became unknown to the house wife, cook and restaurant chef, since over 3 generations had none to eat.

This dilemma was solved by the South African government and landowners agreeing that if wild game could be effectively managed and contained or controlled the wild game could then belong to the landowner. Containing or controlling the game with fences was a must due to liability coming from the new ownership laws. This led to the game being no longer 'res nulus' ( in latin means it belongs to no one ), but being an asset and being owned by private land owners, who also from an aesthetic point were happy, proud and thus looked after THEIR wild game as a newly acquired asset. As south Africa has about 80 % of its total land area owned by private ranches/ private individuals, this shear size and large amount of private ownership caused a MASSIVE upward turn in game numbers and species, a major conservation, habitat and ecological success. 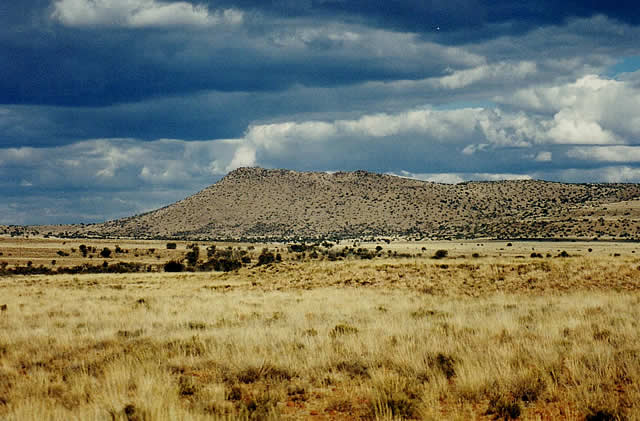 Soon, typical of wild game in well looked after native and natural habitats by conservation minded landowners, the wild game numbers began to increase beyond the carrying capacity of the landowners' properties. This led to the transfer by live capture of WILD game, for monetary gain to other landowners, so causing game numbers to grow even more across South Africa.

TODAY a WILD GAME REVOLUTION has occurred in SA, driven initially by laws giving landowners ownership of the game, then MAINLY from hunters from around the world as well as hunters from South Africa. This has been ongoing, sustainably for over 40 years already.

Today there are, including some predators, well over 30 MILLION wild game animals in South Africa - MOST OF WHICH ARE PRIVATELY OWNED, so these wild game are protected from poaching and over hunting by their owners because the wild game is all a huge and very special asset and is also a national treasure !!!

This huge number ( OVER 30 MILLION ) excludes the small mammals, birds and insect life which also exploded with this wild game revolution, which resulted in an even better recovery of our national ecosystems.

In South Africa the situation is vastly different from, say, that in Europe. In South Africa one finds a huge variety of antelope, many of them very large such as Eland and Kudu. Before the coming of the European settlers, the situation regulated itself as lions and many other predators would hunt the antelope selectively.

That the situation changed was not due to the supposed "bloodthirstiness" of the Europeans but was simply a matter of technology - the rifle AND modern developments - roads, towns and livestock fences limiting the game's movements. This made it easier to hunt anything from lions more easily than with spears or arrows. The appalling mass slaughters of game that took place in many African countries following independence are a sad testament to the misuse of the rifle, but the BIGGER effect of game numbers dwindling was the massive increase in livestock numbers ( sheep, cattle and goats) and farming ( ploughing up natural veld / habitat ) at that time, which out-competed the game for habitat. ( this was in the period approximately late 1800 to about 1950 )

Today lions are no longer found in the wild here but only in game parks large enough to sustain their predation. Outside the parks, however, South Africa teems with game. Farms here do not much resemble their counterparts in Europe and encompass much BIG country / large farms or ranches which is eminently suitable for wildlife and wild game.

While leopards are still found outside game parks, they tend to be found only in the more mountainous and remote areas. Leopard numbers are also growing due to the large wild game prey base and due to farmers/ranchers being more tolerant of leopards in general. But the predators are not enough to control game numbers and never will be due to the size of the human population.

Without natural predators the game would multiply out of control and degrade its own environment to the detriment, not only of the game antelope themselves, but also down the food chain and destroy the ecosystems. It has thus become necessary for man to fill the void left by the larger predators and become a selective predator, a hunter.

Research has recently shown that Wild game have a postive impact on the environment / habitat. The formation in which they graze instinctively on the look out for predators makes their impact on the habitat different and better than livestock. This grazing formation , a more open spread of animals in a herd, causes less soil compaction from hoof action than live stock would. Soil compaction prevents rain water from penetrating the soil to replenish under ground aquifers and worse, water then flows away at speed taking top soil with it. The seedbank, the gold of any habitat, sits only in the top inch of soil and many seeds are viable for up to 7 years, so if the top soil is lost the seedbank is gone and the carying capacity of the habitat declines drastically, affecting all animals, wild game and livestock and eventually people. 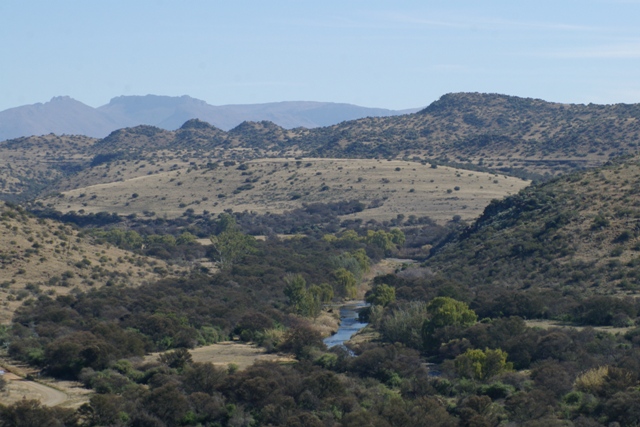 Mixed species of wild game also have a postive impact on habitat becasue each species eats different parts of the plants and eat different plants so a mixed grazing impact occurs, unlike with livestock only certain plants are eaten causing a plant imbalance and resulting in lower optimization and a decline in the habitat quality - generally a farm will produce less protein per acre from livestock than with wild game - a financial and economic impact.

Some livestock ranches do manage their herds strictly and well but many do not and this will result is desertification eventually - a huge loss for the environment and human population.

At Richard Holmes Safaris we take our responsibility for caring for the environment very seriously, ensuring that a healthy regeneration of the antelope population goes hand in hand with protection and conservation of the veld/habitat and ecosystem. This goes together with the hunted game meat being a valuable, affordable, healthy and available source of protein for the South African population and some of the choice game meat cuts are even exported to Europe.

We do not encourage anyone to hunt who does not wish to do so, but those who do so may hunt in the knowledge that they will be responsibly guided by us and will be helping to maintain the balance of nature and feeding our human population. Without hunters, however, game populations would be depleted as they would have to, in this modern world, make way for some other form of commercial enterprise on their wild lands, so the landowner/rancher can still make a living.

We focus on taking out the old animals from the population ( male and female ), thus to us a Trophy is the HUNT, the OLD animal taken and the WHOLE African hunting safari experience - so we don't hunt with a tape measure, but keeping records of all measurements, weights and data on each game animal taken, which is a very valuable data base for our game management. Our method of hunting does not affect the transmission of genetic quality nor genetic variablity and also satisfies the hunters, who we have found are happier knowing they have taken out an old animal which is no longer productive and which has already passed on its genes. The taking of a part of the animal as a momento, i.e. THE TROPHY, is an incidental part of the hunt.

Further we believe the hunting instinct is innate to humans from our ancestors who had to hunt to survive. eg. the san tribe in africa hunted, collected food and items for food, vegetable matter / berries, ostrich eggs and items from their hunted game and collected items, eg. hides, horns, hooves, tendons, sinues, bones and ostrich egg shells.

The north american indians and many native tribes world wide still hunt and collect items from the hunted game, no different than a modern trophy hunter keeping items / animal parts from his or her hunted game animals.

Rock art confirms these historic activities. Today we hunt for jobs, wives, partners and pursue many things in life, all this is based on our hunting instinct. Today we have candlelit dinners, a romantic, but deep down innate part of our nature of survival and hunting, equals fire !!

Not everyone must hunt nor gather wild natural items in todays modern world, but those who wish not to hunt should not be critics of those people who do hunt and gather or collect a trophy item. Simply and in the good nature of politeness, respect and caring, if you have never hunted wild game nor have done anything like be a doctor or a sports player, you cannot and should not comment adverserly on the activity or profession, as you are not experienced nor qualified to do so.

Hunters today, worldwide, put the MOST money and efforts by far into conserving wildlife, wildlands and ecosystems than any other groups, tourists or non hunting / anti hunting organisations. If it were not for the hunters coming to safari hunt in South Africa, approximately 30 million wild game animals will lose their habitat, BECAUSE the landowners on whose land the wild game occur would need to earn their income / livelihoods from other means, eg. beef, lamb/sheep, goats and crops, which are not natural and can adversely affect whole ecosystems in the marginal veld farming areas of South Africa.